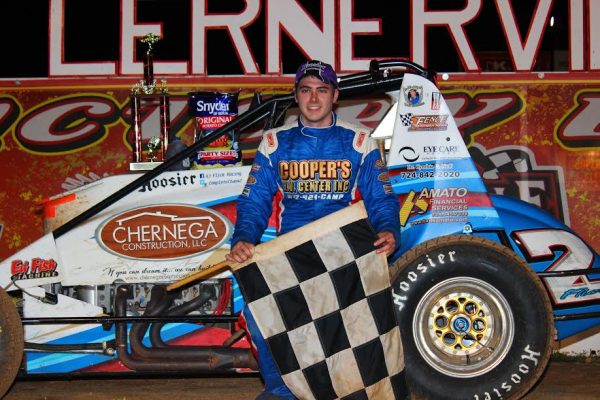 Story from The Dirt Network http://thedirtnetwork.blogspot.com/2017/07/the-story-from-lernerville-flick.html

By Gary Heeman       All Photos by Patrick Miller Photographer

Having come so close in his previous chance at winning a Buckeye Ohio Sprint Series event at Lernerville in previous years, including a runner-up performance in 2016, AJ Flick seemed to be once again a favorite for a podium finish on Friday night.  And from the start of the 25 lap main event, Flick was not only a front runner, but quickly put the field behind him in dominant fashion. The young Winged Sprint Car pilot put all but seven cars at least a lap down, looking like a driver who had been driving a Non-Winged car for years on end en route to his first career win in BOSS Series action.

Gale Ruth Jr. and Arnie Kent paced the 22 car field to the initial green flag, however not even a lap into the main event the red flag came out as Matt Cooley and Mike Miller found themselves both on their side in turns three and four. Both drivers were able to get out of their cars under their own power. 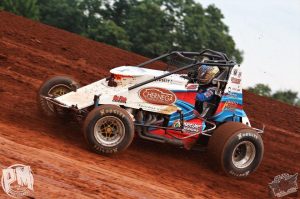 When action resumed, Ruth got out to the early lead running the bottom to middle grove with Flick putting pressure on him almost immediately, coming forward in relentless fashion from his fifth starting spot. Flick made his move for the lead just before the3 lap mark, putting Ruth and the rest of the field behind him while the caution flag came out for a Riley VanHise spin in turn two.

Flick looked as if he’d been shot out of a cannon on the restart while behind him, Michael Fischesser began to challenge Ruth for second and Carmen Perigo surged forward from his seventh starting spot to take up the fourth position. Perigo managed to slide around both Fischesser and Ruth to take his place behind Flick who was running at a blistering pace out front.  But behind all of the action at the front of the field, 2016 winner Justin Owen and BOSS Series points leader Dustin Smith were maneuvering through the field with relative ease and charging toward the front with precision and purpose.

Owen started 13 on the grid and Smith had to race his way into the program from the back of the bmain, starting from 19th position,  and both looked as if they might find a way to hunt down Flick for the win as the laps wound down. Owen was able to make the most serious challenge as he slid Perigo for the second spot on lap 16.

Owen was in desperate need of a caution though as Flick did not lose one bit of momentum dealing with lapped traffic, putting the car where he needed to while making it look easy.  Owen’s wish was granted with 21 laps in the book when Joe Butera spun at the bottom of turn four. However, on the restart, no one had anything for Flick as he pulled away again in the final 4 laps to secure the first BOSS wingless win of his young career. 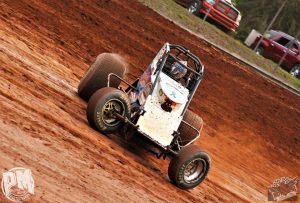 “I had so much unfinished business here from last year and I wasn’t going to be very happy with myself if I couldn’t pull it off,” Flick said in victory lane.  “You just pretend you hear noises and drive the wheels off it, it’s all you can do. I kind of have a little bit of an edge I think, to a degree, maybe not over the BOSS guys but I came from the street stocks and I more or less had to run it the same way that I did here.  I went into turn one in hot laps and the thing just pushed like a truck, we changed the car a bunch. I made some real key moves in hot laps to get to the lead in the feature and I was just able to hold them off from there.

Thank you Gary and Pat for the use of your work. Please support these gentlemen at http://thedirtnetwork.blogspot.com/ and https://www.facebook.com/pm721photography/