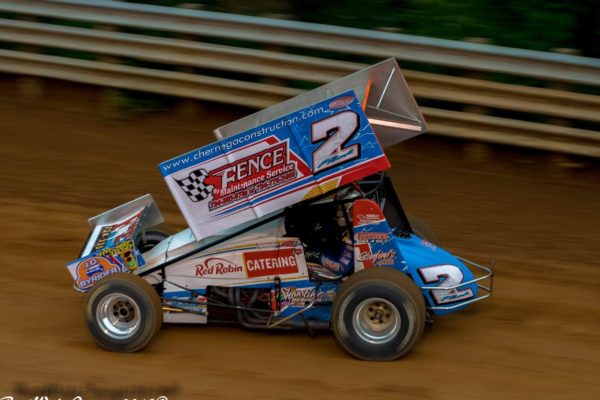 Apollo, Pa- Flyin’ AJ Flick of Apollo picked off a pair of top-three finishes at Port Royal Speedway over the weekend competing against the always tough Pennsylvania Posse sprint cars during the Juniata County Fair.

On Saturday night, the Apollo Ace won his heat race and then lined up third for the 25-lap main event.

Flick took the lead in the feature event on lap five and would lead all the way through lap 21 before eventual winner Anthony Macri took over after a challenging duel for the win.

“Started third. Got to the lead and led some laps. Faded as the track slowed down and finished third. Honestly just mind-blown we can even race and run up front with these guys. I’m just so thankful,” Flick said after the exciting race.

Then on Monday in the annual Port Royal Labor Day Classic, Flick started third on the tricky daytime surface and maintained the entire event to run home a fine second.

Flick and the No. 2 team had planned on competing at Selinsgrove Speedway on Sunday but the race fell victim to rain.

Flick and the team will compete for $52,000 to win during the upcoming weekend in the Tuscarora 50 races at Port Royal Speedway on Friday and Saturday night with the All Stars in the house.