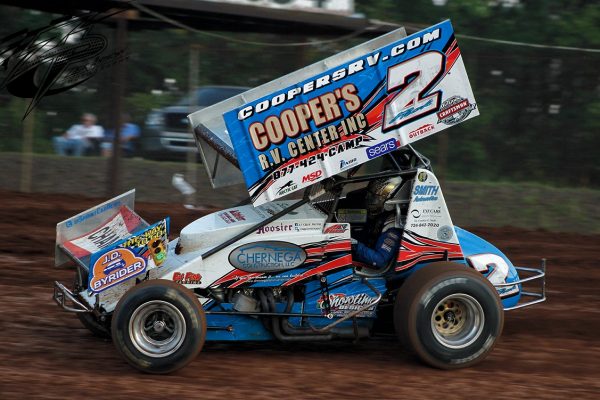 “To add my name to the Lernerville Speedway record books as a sprint car track champion was an incredible feeling. To do it twice; I can’t even begin to explain how it feels,” Flick stated, pilot of the familiar Ferguson Heating & Air Conditioning, Cooper’s R.V. Center Inc., Chernega, J.D. Byrider, Champion Spark Plugs, No. 2. “The record of names on that list is long and distinguished. It is definitely a humbling feeling. I can’t thank my family, my sponsors, all of my supporters, and mostly my fans for sticking behind me and believing in me. It was a great season at Lernerville Speedway.”

With a second track title in his back pocket, Flick can turn his complete attention elsewhere.

“We accomplished our goal at Lernerville Speedway, so now we can turn our complete focus out east,” Flick explained. “Racing for a track championship requires a lot of attention. Now that we have that, we can kinda relax, so to speak, and plan some trips out east to places like Port Royal Speedway. We’ve raced there a number of times this year, but now we have some extra momentum and confidence on our side. Our plan is to represent Western Pennsylvania well. I really enjoy racing out there.”

Port Royal Speedway in Port Royal, Pennsylvania, will be Flick’s main focal point for the remaining segment of his 2017 season. The Western Pennsylvania native will visit the “Speed Palace” on at least three separate occasions during the next two weekends, beginning tomorrow evening, September 2, for the 163rd Juniata County Fair opener. Flick will return to Port Royal Speedway on Monday afternoon, September 4, for the 66th Annual Labor Day Classic; a $4,000-to-win, $325-to-start, afternoon showstopper that will act as the final test session for Tuscarora 50 weekend.

Tentatively, Flick also plans to make an appearance at Williams Grove Speedway in Mechanicsburg between his visits to the Juniata County Fairgrounds on Sunday, September 3.

“Our plan is to race Port Royal twice during Labor Day weekend. If things go ‘OK’ tomorrow evening, we may stay and head to Williams Grove Speedway on Sunday for the Billy Kimmel Memorial. That will be determined tomorrow at some point,” Flick said eagerly.

Capping off a two-weekend stretch in Posse Country, Flick will revisit Port Royal Speedway on Friday and Saturday, September 8-9, for Tuscarora 50 weekend. The two-day program, sanctioned by Tony Stewart’s Arctic Cat All Star Circuit of Champions, will feature back-to-back complete shows, with the finale on Saturday, September 9, headlined with a 50-lap, $50,000-to-win main event; the biggest race in Port Royal Speedway history.

“We’ve had this race circled on our calendar for months,” Flick said about the Tuscarora 50. “Right now, the plan is to head out there for the entire weekend. With my work schedule, Friday may be difficult as of now, but we’ll see. We will definitely be making the trip on Saturday. Teams from across the country are making the tow to Port Royal for that race. To be a part of that field of cars is going to be really special. Making the A-main is going to be quite the task. I have a great group of people who provide me with the equipment necessary to be competitive. I think we have what it takes. We’ll work as hard as we can and see what happens.”

Fans are invited to keep up with AJ Flick on all of the available social media networks, as well as online at www.ajflickracing.com.

This message is only visible to admins.