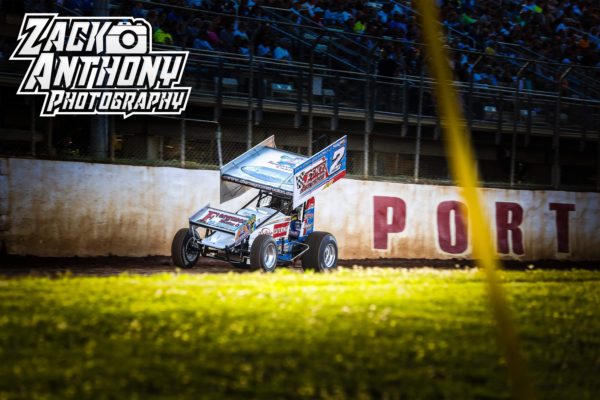 Its been busy. I’ve been slacking on my website. But what else is new, right? I think there has been 11 races that have passed since my last update. Ill explain them below but wont be able to go through a full detailed recap like usual. Maybe as the year ends, I’ll gain some time to get back on track with the site and my racing videos. Nonetheless, for anyone that reads this, thank you for the continued support!

We joined some races during PA Speedweek, starting Wednesday July 3rd at Port Royal. I qualified 6th, won the heat, and started 2nd in the feature. We grabbed the lead from Danny Dietrich on lap 1, led until lap 11, and lost the lead to Logan Wagner. A caution soon came out and my RR tire was cut at the same time. My crew replaced the RR tire and we salvaged a 16th place finish.

We drove to Hagerstown the same night to start prepping for the July 4th PA Speedweek show. It was my first time at the speedway, yet we qualified 15th, transferred out of our heat race in 5th, and fought around mid pack until late when we faded to 16th. Very happy with our first race there and an awesome new speedway to race on. 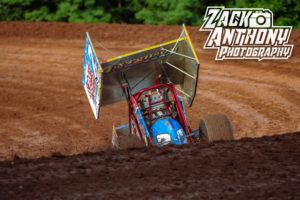 The crew and I drove home Thursday night and prepped Friday July 5th to race against the Allstar Circuit of Champions at our home track of Lernerville. A strong 9th place qualifying run allowed us to stay up front in the heat and transfer in 3rd. The track was very tricky and seemed like quite a lot of follow the leader around the bottom. I had raced into the top 10 at one point, tried to make moves around other cars, lost spots and had to fall back in line. We came across the line in 11th.

Saturday July 6th was the important night. The Greg Hodnett Classic. I wanted this win more than anything. I had a 5 step process. #1 was qualify well. We did, in 6th out of 35 cars. #2 was to win the heat race; we did. #3 was pull a good pill; we did and started outside pole. Step 4 was get the initial jump; we did and led out of turn 2. The final step was to win the Greg Hodnett Classic. We led until lap 16 when something cut our RR tire down, it exploded, and ended our night. Heartbroken isnt even the right word. But we will come back stronger than ever next year. 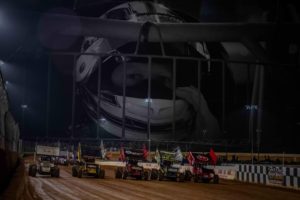 We regrouped for regular racing action at Lernerville on July 12th. We had a rocket ship of a race car all night long. We wont the heat race by a large margin and were on our way towards winning the feature when the rearend broke and ended our night.

We went back out to central PA on July 13th for another crack at Port Royal Speedway. We were strong early in the night again with another big heat race win. Unfortunately, we had struggles behind slower cars in the feature and fought around 6th place all race long until the checkered flag flew.

Back to Lernerville for July 19th where we were pretty dominant all night long. Started near the back for the heat race but got up to 4th. Then started 6th in the feature, had the lead by lap 7, and won by 1/2 a track.

July 20th Was at Port Royal again. We continued our early night speed. Grabbed the early heat race lead and won it. Started 4th in the feature, had a few shots at the lead but ultimately got passed by better cars and drivers and fell to 4th.

The World of Outlaws came into Lernerville on July 23rd. We qualified better than ever before and ran a strong 4th in the heat race to drive our way into the Don Martin Memorial Silver Cup. I tossed a setup in the car but i failed to account for the change in wing speed as the track slowed down. I had the car badly balled up. After an early spin while running 14th, we drove back up from 26th to grabbed 19th at the final checkered. 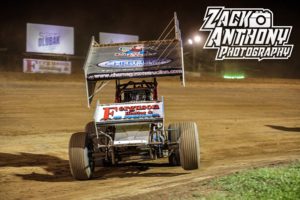 We had 3 days to regroup and be  at Thunder Mountain on July 26th. We made feature redraw by going 5th to 2nd in the heat. However, after pulling pill 7 of 8, we had our work cut out for us. The track was pretty row and bitey and led to a narrow racing surface. A good start powered me to 4th place on lap 1. Unfortunately, we struggled to get enough momentum to pass any other race cars the rest of the feature event and crossed in 4th to end the race.

We re-prepped the race car to get ready for Sharon on Saturday, July 27th. Our early night speed was there, yet again, as we qualified pole of our strong heat race. The top 4 invert lined us up 4th. The track started to slick off so we made some significant changes to the car. We had decent speed, but could not get enough bite to rocket past our 3rd place finish. The missed redraw caused us to start 12th in the main event. With a lot of race cars to pass, we tossed another wild setup at the race car hoping to find something. The race went nonstop after an early lap 1 caution. With a track as slick as ice from top to bottom, we used the entire race track to make passes. Rubber laid on the bottom of 3&4 with just a few laps to go. However, we used the extra speed to make a final last turn pass and finish 4th again.

We have had very fast race cars. We still need to find extra speed to try and make our runs up through the field a bit quicker. If we can keep our early night speed and continue to progress as the track slicks off, I know we will be tough to beat.