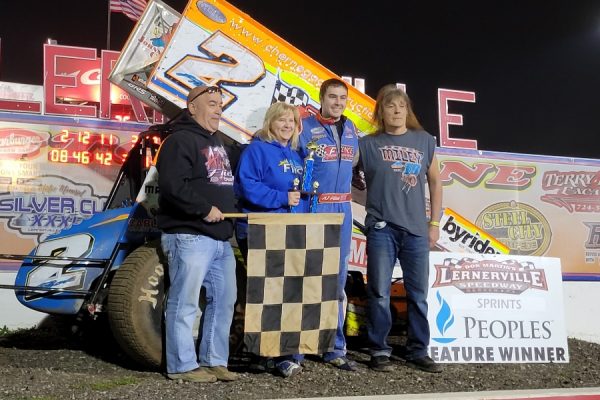 Friday April 22 was a special night of racing. A friend, nicknamed Fast Andy, put up an extra $500 to win. But the meaning is what made the race so much more important.

It was in memory of our great friend and longtime supporter Dave Hartman, the owner of Fence by Maintenace Service, who passed away in January. Dave jumped on board with our #2 Sprint Car team in 2017. His partnership started small but expanded into a bigger role as our friendship grew. Dave has helped me purchase numerous race suits over the past 5 years, new sets of tires, and helped me recover after my 2018 Primary Sponsor, Coopers RV Center was bought out by Camping World and could not renew their partnership. Dave has supported me tremendously. He was a part of my first chili bowl trip in 2018, 4 Lernerville Track Championships, and our huge Dream Race win at Port Royal. We used to make countless jokes and talk on the phone for hours about our racing weekends. During the 2020 season, he played a trick on me where he put pill draw numbers on poker chips, ping pong balls, and fuel additive containers, just like all the travelling series do. The best part though…. all were labeled as #1 to make me believe my draw luck was changing. Dave was able to attend our championship night celebration and quite a few of our wins, including some at Tri-City and Thunder Mountain during the 2021 race season. 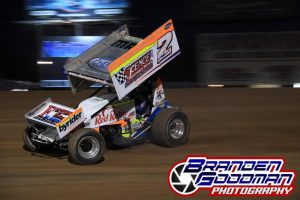 We met Dave through go karting. His sons Ryan and Cody raced. Cody was my age and to be honest, they won most of the time. Nonetheless, we won our fair share and knew it was an accomplishment to beat the team Dave, Cody, and Ryan had created.

Winning this race with Daves brother, Dan, in attendance, along with his wife, Debbie, and mother, Ginger, meant the absolute world to myself and the crew. I was nervous and anxious all day. I knew the most important thing to everybody was to just do our best and don’t quit. No matter what happens, Dave would have been happy if we gave it our best effort. Never once was he upset with my driving performances. 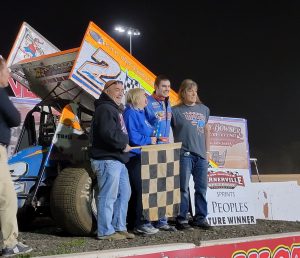 After winning the heat race, we had the chance to be redrawn anywhere in the top 9. Of course, with my luck, we were drawn 9th. I looked at the sky, laughed, and said, “Thanks Dave. Now we really have to earn it”. The race went 24 laps nonstop. I took the lead on the white flag lap and then the caution came out. We were begging for a caution the entire race to help me catch the leader, and of course one comes out after I take the lead. Dave didn’t want to make it easy for me, obviously. We led the final Green, White, Checkered to win the race and be greeted by a bunch of teary eyed friends and family in victory lane. Myself included. It was a bittersweet moment. We won the memorial race but every single one of us there would have traded it to spend one more day with Dave Hartman.

My career to this point has been the results of many important people trusting and believing in me as a driver and person. Dave was one of the best. All of us will miss him more than I can express with words from this keyboard. But Dave wouldn’t want me sitting here typing this. He’d want me working on my craft and trying to secure more Sprint Car victories. He told me many times, “I’m not a sprint car fan. I’m an AJ Flick fan”. Well, I was a Dave Hartman fan and this one was absolutely for you, buddy. Keep watching over me as we go win some more.