4th Annual Pave the Clay Ready to Roll this Sunday

Pave The Clay Preview: Perfect Blend Of Fun And Fundraising On Tap This Sunday 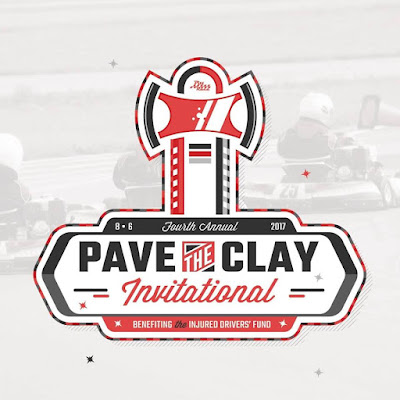 “Everybody remembers hearing when Brian Steinman had his misfortune a couple of years back and what we do at Pave The Clay helps to go to things like that.” – AJ Flick

It started as a fun afternoon, and unexpectedly became so much more. The annual Pave The Clay fundraiser at the Pittsburgh International Race Complex takes place Sunday August 6th, and at the front and center of the popular event, is a local driver took a friend’s idea, and made it into something that had a deeper purpose, while keeping the entertainment factor at a high level.

“Originally the idea came from my buddy Aaron Easler back in my rookie season in the sprints back in 2014,” Flick remarked, regarding the genesis moment for the event.

“He came up to me and said how about if we got twenty people together and we rent out the Pittsburgh International Race Complex for an hour and everybody pays 50 bucks and we’ll go out and race for fun. So I kind of took the idea and put it on social media and it blew up from there. And through all that we though that maybe we could get some more things going and possibly raise some money for a charity. We didn’t really have an idea of where we were going with it, it was just an idea at the time, but we got it all organized in two weeks and when it was done we’d ended up raising a few dollars for the Steve King Foundation and I knew there was so much more potential there.”

The potential Easler helped create, has turned into an afternoon at the races that is unique in format and feel, bringing together area drivers from different disciplines with one thing in common..dirt. Although the road course, covered with go karts will be completely paved, the motivation behind why these drivers come out is the same that they display on a weekly basis at their home track.  Drive hard, drive to win, have a good time, and also to help others in need, keeping in the spirit of the dirt racing family that all of them come from. Racers helping racers, a theme that stands as a reason for being. Still though, the event takes countless hours of planning and preparation. When Flick decided to help Easler grow the event in the form it now takes, there was a good bit of planning, preparation and time sacrifice he would have to grow accustomed to. 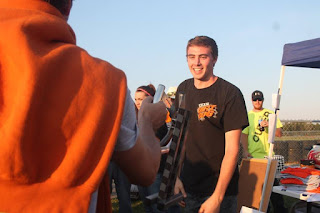 “The next year I basically took more control of it for the second year and I was able to get started earlier and get some things donated like baked goods from families and friends and drinks from Turner’s Premium Tea that we could sell. And we also got a three hour block reserved at the track and more drivers in the mix too. And when it was all said and done, we’d raised over $1700. So when we came out for this year I knew we could go even bigger and better. One of the hardest things for me when it comes to arranging the details was when pit race came to me and said we couldn’t start 25 karts in our amain again due to kart availability at the time, but I was able to talk them into letting us use some of the newer cars only for the feature. I had to prove to one of the folks there that we knew what we were doing, that we were racers and good at what we do. Other than that, it’s a lot of meticulous things like spending a day to go up and talk to the owners, also spending a lot of time running around on race day getting payments from the drivers and a lot of time goes into finding sponsors so that I don’t have to raise prices for drivers. To get that fourth hour into the event which means more racing, and more hot dogs being sold and other things, meant that I’d have to find another $1,000 so, I had to help raise it.”

Upon arriving to take in the afternoon, fans can expect a well planned format with a few new wrinkles that Flick slips into the show. It’s rolls on like a night at the dirt track, a sight not typically seen at a road course where time trials and standing starts with no pace laps are the normal way of life. Flick likes to keep it as close to what they might expect at their local show as possible, while allowing drivers ample track time for their money.

“We’re racers, we’d like not to try to play beat the clock, but we want to race other racers. So we go with a format and I try to do something different every year. The first year we inverted everybody that made the amain by their lap times and that made for some good racing. And then last year we made everyone pull pills and it just so happened that some of the fastest drivers got stuck in the back which was fun too. Not only do we want to put on a good race for ourselves, but for all the fans that come out and watch too. If I have 60 drivers I can take 15 of them and put them in four heats and then I’ll take four out of those and then we have three bmains, so we kind of pare it down to 25 karts. But we try to get everybody as much race time as possible, so every body that didn’t make the amain got to run a non qualifiers race and another race for those who didn’t make that race. I don’t want people to pay $60 and only get a couple of laps.”

As far as who to expect goes, fans can expect to see area names of note that will ring a bell with virtually everyone, and with regards to performance on the track. The first three years have made it clear that division preference need not dictate whom might make a potential champion.

But what isn’t lost in all the festivities, is the real reason Flick has made this event what it is. And for fans in the area, the reminder of what can happen to any driver still rings true to this day. Brian Steinman’s accident at Lernerville years ago, provides an example of what the funds generated by the event can be used for, and it is a memory situated in the heart of every driver and fan that was there the night the incident occurred.

“Everybody remembers hearing when Brian Steinman had his misfortune a couple of years back and what we do at Pave The Clay helps to go to things like that. The money that we were able to raise last year was able to help get him a specialized bed and a place to stay for a couple of months when he was having surgery. For us to have fun, but to still be able to help raise money for injured race car drivers means so much. Especially knowing that even myself could be one lap away from a similar incident.”

It started as fun, but became so much more, Flick has paved the clay for all the right reasons and it taught him something about himself along the way.

“I have never been in a situation where I have put in so much work and received nothing out of it, except for happiness and I never thought that something like that could be so worth it. Even with racing, you can win and you can be happy, but you receive a paycheck afterwards so you get two things for all your hard work. But with Pave the Clay, you get nothing in return. We donate everything, we’re 100% non profit and I put in hours and hours of my time to try to make this event bigger every single year. And when I first started it, I never knew how big it could get, but after we raised the money and we dontaed it, I was amazed at what we were able to do and I couldn’t really focus, because I never thought something like that was possible.”

When: Sunday August 6th  12 Noon-4 PM
Where: Pittsburgh International Race Complex
Admission: Free to the general public
Refreshments: An assortment of hot dogs, baked goods, beverages and other concession stand fare will be available for purchase.